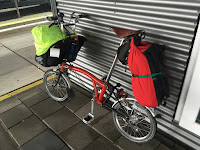 Another trip on the Newcastle - Ijmuiden ferry! This time for a few days cycling on North Holland, the area including Amsterdam and north. Accompanied by my friend David on a Claud Butler hybrid towing a Burley Travoy trailer.
Here's my Brompton touring set up as we left the ferry terminal at Ijmuiden. Rather wet so had the waterproof cover on the Brompton front bag!
After a wet couple of hours cycling alongside the Amsterdam canal we reached the city but all very easy as always in the Netherlands. 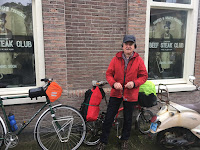 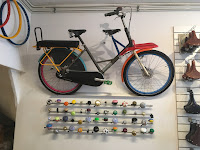 Once in Amsterdam we visited the fantastic 'Work Cycles'.
The bell on the top right is missing because I bought it! 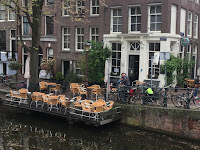 Then a short cycle to Cafe t'Small for lunch. Been there a few times before, when lunch arrived it started raining again so we moved inside up the steepest curving stairs you'll find! Can't imagine it being allowed in the UK. Best not to drink too much.

With lunch finished we reluctantly descended the stairs to find the rain had finished again and we set off along the canals and the tunnel under Centraal station to catch the ferry over the river. 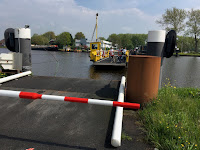 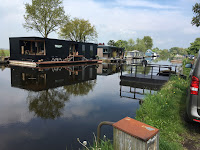 The route then went through Broeck in Waterland where everybody seems to live on these houseboats with their own little ferry. We crossed a canal by another little chain ferry! 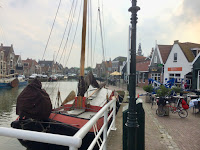 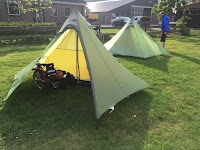 After an ice cream (it was now rather warm!) in Monikerdam we reached our farm campsite just north of Edam. We both use Go Lite Hex 3 tents with Ooknests. Note the folded Brompton inside. 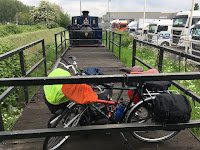 The next morning we cycle alongside the Zuider Zee for about an hour but rarely saw it due to the tall dyke holding back the sea.
We reached Hoorn where we hitched a ride on the steam railway, of course there was provision to carry bikes. To get them up on the wagon from the low platforms the train carried a long u shaped metal trough! The train takes about 40 minutes to get to Medemblick where we had lunch and sat out another rainstorm.

Once it cleared we set off into a strong headwind to our next campsite. Probably the only drawback of cycling in the Netherlands is when there is a headwind! Our average speed halved.

Next morning we set off early wondering if a headwind would be an issue but it had dropped and we shot along paths through woods and alongside lakes into Alkmaar where we stopped in the deserted town centre for coffee. After riding along bike paths and quiet roads we got to the north sea coast and turned left on the North Sea Cycle Route - miles of brick paved cycle route through the dunes. Lots of other cyclists including many pelotons going really fast - 'hup hup' shouted as a warning. Mind you everybody else seemed to be going faster than us too - most on electric bikes!
When we reached Wijk aan Zee we stopped for lunch, had a potter round a market and then set off to cycle across the huge ship locks at Ijmuiden, suddenly once again into a strong headwind but immediately after the locks we arrived back at the ferry port, had a chat to some fellow cyclists and them boarded the ferry. 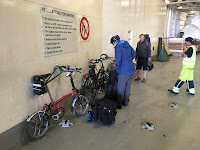 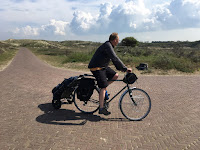 Alastairs bikes are:
Brompton 5 speed, fitted with rear rack and M type handlebars.
Brompton CHPT 3 edition, 2 speed, titanium extremities. Very lightweight and fast, used for going to meetings or the railway station.
Specialized Hard Rock, an old MTB used for riding on trails.
Carlton Super Course, my classic bike used for events.
Batavus 'Dutch' roadster, 2 speed 'Automatix' Sram hub gear with coaster brake, front hub dynamo and brake. Automatic gear change at about 10mph.
Inkerman Special, this is a bike I built up myself with a track frame and Sturmey 2 speed kick shift coaster rear hub. Copper riveted Brooks saddle, copper Sogreni bell and copper coloured pedals.
Most of my touring trips are done using my 5 speed Brompton (Sturmey Archer hub gear), it also has a Brooks B17 saddle and Ergon grips.
As well as the standard luggage block on the front which carries all my camping gear there is a Monkii system holder for large water bottles and extra kit. An Alpkit 'Gourdon' waterproof bag with carry straps hangs off the saddle with clothing and rests on the rear rack.
For camping I use a Golite Hex 3 single pole tent with an Ookworks nest inner. Is very light and packs down really small but leaves lots of room for gear (and my folded Brompton). Brompton front bag holds tent, sleeping bag, sleeping mat, Trangia, fuel bottle, cooking utensils & tools.
This set up allows me to use public transport easily, 'Gourdon' on my back and Brompton bag and bike in each hand.