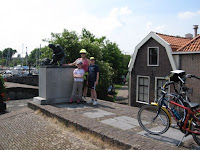 A quick few days in Amsterdam with a visit to 'Cycle Vision' recumbent bike event. First of all the problem of getting three normal bikes and a KMX three wheel recumbent to Newcastle to to catch the ferry to Ijmuiden. Unfortunately trains won't accommodate them so we had to drive to Newcastle. Waking up the next morning we had a 25 mile cycle ride easily navigated to Amsterdam.
Quite by chance on the way we passed a sculpture of the boy with his finger stopping the water!
Having got a little lost on the outskirts of Amsterdam we eventually found our hotel near Vondelpark. 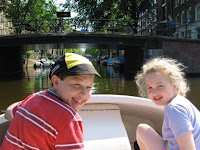 We spent a couple of days sightseeing and meeting up with friends including trying out the 'Canal Bikes' - easier to cycle on dry land!

But on one of the days we visited the great Cycle Vision event at the Sloten velodrome a few miles outside Amsterdam. The route out was through the Vondelpark and following various canals until we arrived at the event.

As well as recumbent races in the velodrome and on the outside track there were many recumbents and velomobiles to try out. Some of them, especially the more extreme low riders takers quite a bit of skill to master.

The main reason for visiting was for the children to take part in a race each. Much to Jakes annoyance Polly's race was in the velodrome with his being on the outside track. Luckily they were at separate times so they both used the KMX three wheeled recumbent. 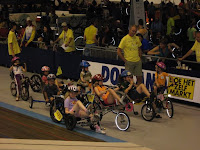 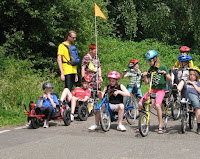 There seemed to be a medal for everyone but a great experience for them both. 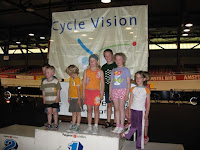 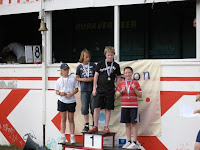 On the way back we loaded the bikes onto the roof of the Russian built hydrofoils that run fast ferry service between the railway station in Amsterdam back to near Ijmuiden and then back on the overnight ferry to Newcastle.