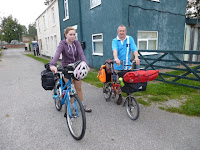 In late August 2013 Alastair, Jake & Polly cycled from London to Paris. Jake decided he wanted to cycle the whole way so set off a few days before to cycle from Chesterfield to London following Sustrans route 6 and then the Grand Union canal, with a couple of days rest at his grandparents.
We met up at St Pancras after Polly and I travelled down by train and set off to follow the route described by Chris Smith -www.travelloglewes.co.uk/index.php?page=london--lewes--paris-bike-ride - which took us onto the Regents Canal, along Sustrans route 1 to the foot tunnel at Greenwich. 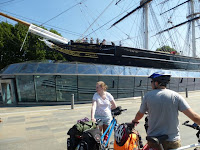 From Greenwich we followed Sustrans route 21 out through south London which is a lovely route almost traffic free through lots of parks and well signed until New Addington! Here the cycle path winds across dual carriageways and tramways and up a never ending hill on a shared path next to a very busy dual carriageway. After stopping to stock up with snacks and water the route then goes across the North Downs on a series of bridleways and quiet lanes but it is hard work. Some of the route is barely suitable for walking let alone cycling - steep downhills on rutted stony tracks followed immediately by steep uphills. At one point it was so steep it needed two of us to push one loaded bike up. Not much fun!
We finally got over the last hills and past the M25 to our hotel just north of Gatwick airport at about 8.00pm. We stayed at a Premier Inn and they unlocked fire exits etc to allow us to get our bikes into our room overnight.

After a good nights sleep and my hopeful promise it would be an easier day we set off following Sustrans route 21 again past Gatwick airport and then along the Worth Way to East Grinstead. Much easier!
Once we got to East Grinstead we had lunch and I couldn't resist using the Bluebell (steam) railway to take us to Sheffield Park. The section from East Grinstead has only just opened and provides a scenic route through Sussex. Once at Sheffield Park it was 16 miles on relatively busy roads via Lewes to our campsite near Newhaven. 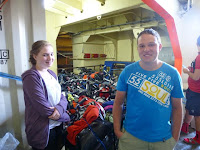 The next morning a short cycle along an traffic free path brought us to the ferry. Eventually there must have been over 50 cyclists waiting to get on. One large group who were obviously supported by a van but mainly cyclists on their own or in two's and three's laden with camping gear as we were.
Once in Dieppe and the bikes unroped on the ferry we all snaked through customs and the various groups set off.
We were following the Avenue Verte to begin with which is a signed route between London and Paris and straight from the ferry the route was signed but we got a bit lost in the town, as did many other cyclists - we kept seeing them at all the junctions! However the whole town seemed to be playing the James Bond Skyfall theme on loudspeakers which amused us as we cycled through. Once we had found the route again near the the railway station we set off for the few miles on roads before the almost 40 mile traffic free path. 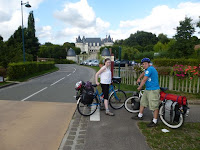 We cycled about 22 miles after Dieppe to arrive at a campsite at Neufchatel en Bray. Very good campsite with restaurant and of course you can order bread for the morning.

It was slightly wet when we left the next morning to continue on the traffic free path but soon cleared up to bright sunshine. This is what paths should be like in the UK - 3 metre wide, tarmac, no barriers and at each road crossing cyclists are reminded they should stop, although in practice they don't, the very few cars going slowly and giving way.
The path ends at Forges les Aux with an easily missable left turn off the traffic free path and it is back onto very quiet lanes through undulating countryside.

After much research we had decided to follow the official Avenue Verte until St Germer de Fly and then follow a route described by Donald Hirsch - www.donaldhirsch.com/dieppeparis.html - which approaches Paris through several parks and ends at the Eiffel Tower rather than Notre Dame cathedral on the official route, so after lunch in Gournay en Bray we continued on the official route to St Germer and then turned off to follow the Hirsch route up a huge long, open hill to our second campsite at Le Coudray Saint Germer. 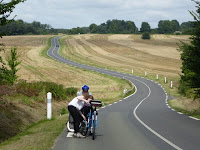 This campsite didn't look too promising from the first pedestrian entrance but we cycled along to the vehicle entrance to be met by the son of the owner on a bike. We asked about camping and he took us to his mother saying to her 'more English!' We were shown to a large plot next to the 'other English' who turned out to be two girls we had been next to on the ferry. Shortly afterwards another English girl turned up who we had cycled with for a short time coming out of Dieppe!

After a sleep interrupted by loud church bells and a huge firework display (it is a tiny village in the middle of nowhere!) we packed away and discovered there was another English couple staying who had been at our campsite in Newhaven. 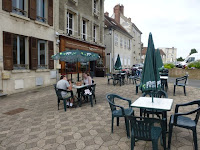 This day was all on quiet roads in open countryside with lovely sweeping downhill sections passing through small villages until we arrived at Marines which we had earmarked for lunch. As this was a Sunday I was a bit sceptical of finding anywhere open but as we descended into the town there was a patisserie doing a good trade complete with a group outside looking at the upturned bike of the 'English girl' from the campsite. Her name was Erica and she had a problem with her gears, we managed to sort it all out and discovered we were heading for the same campsite that night. We bought cakes and a strange pizza type savoury and were directed to a cafe in the town where we sat and had a drink and our lunch.

The route became more hilly after that but a huge descent brought us into Triel sur Seine, we crossed over the river to our next campsite to find not only Erica there but the other two girls as well. Shortly after setting up camp the other couple arrived too!

The last day saw us cycling along quiet roads and then into the first of the forest paths which were mainly tarmac and basically small roads but with no traffic. There was a definite change though, clearly nearer Paris and we were overtaken by a group of riders, one in full Sky gear charging up a short hill we could barely push up! We caught up another large group with no luggage on light road bikes who then went the wrong way, catching us up later but then stopping to regroup only to overtake us again a few miles further on! Tortoise and the hare! 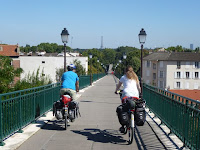 After a quick diversion into the grounds of Versailles we made a mistake in the St Cloud area and took a while regaining the route. Our approach to Paris on the Hirsch route was on an aquaduct over the Seine built by Eiffel and then round the Hippodrome with speeding cyclists using the cycle race track to be finally onto roads about a mile from the Eiffel Tower. The traffic wasn't threatening though and we finally crossed the bridge over the Seine to arrive under the Eiffel Tower. Polly and I had done 220 miles from London, Jake had done about 450 miles from Chesterfield. 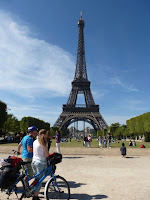 After a short while at the tower we attempted to cycle up the Champs Elysee but the traffic was so bad we cycled up the pavement instead! Can't imagine doing that on Oxford St, nobody seemed to mind though! We then crossed Paris to our apartment near the Gare de L'Est. The reception staff helpfully allowed us to lock our bikes in the secure garage underneath the building.
The next morning we took our bikes to the Gare du Nord and sent them back on Eurostar together with a large bag containing all our camping gear. Eurostar will take unaccompanied baggage ahead of your journey and keep it at the other end until your arrival! After three days in Paris we caught the train back to London and then the train home.


It was a great trip, certainly highlighting the differences between the UK and France! Cycling provision and motorists attitude was so much more pleasant in France. Route 21 in England is hard work! In France some of the hills were a challenge for an occasional cyclist like Polly but she happily walked up the worst of them. Polly and Jake were riding Raleigh hybrid type bikes with luggage front and rear. I was riding my Brompton with the large travel bag at the front and a rucksack hung off the saddle at the back. If you intend to do the same trip I am more than happy to answer any questions, contact me alastair(at)theinkerman(dot)org

Alastairs bikes are:
Brompton 5 speed, fitted with rear rack and M type handlebars.
Brompton CHPT 3 edition, 2 speed, titanium extremities. Very lightweight and fast, used for going to meetings or the railway station.
Specialized Hard Rock, an old MTB used for riding on trails.
Carlton Super Course, my classic bike used for events.
Batavus 'Dutch' roadster, 2 speed 'Automatix' Sram hub gear with coaster brake, front hub dynamo and brake. Automatic gear change at about 10mph.
Inkerman Special, this is a bike I built up myself with a track frame and Sturmey 2 speed kick shift coaster rear hub. Copper riveted Brooks saddle, copper Sogreni bell and copper coloured pedals.
Most of my touring trips are done using my 5 speed Brompton (Sturmey Archer hub gear), it also has a Brooks B17 saddle and Ergon grips.
As well as the standard luggage block on the front which carries all my camping gear there is a Monkii system holder for large water bottles and extra kit. An Alpkit 'Gourdon' waterproof bag with carry straps hangs off the saddle with clothing and rests on the rear rack.
For camping I use a Golite Hex 3 single pole tent with an Ookworks nest inner. Is very light and packs down really small but leaves lots of room for gear (and my folded Brompton). Brompton front bag holds tent, sleeping bag, sleeping mat, Trangia, fuel bottle, cooking utensils & tools.
This set up allows me to use public transport easily, 'Gourdon' on my back and Brompton bag and bike in each hand.