This sounds like a really long cycle trip but with most of the route on trains and ferries it's quite easy!
The first stage of the journey was by train to London (note - this is no longer possible because East Midland Trains will only book 2 bikes per train now). Once at St Pancras it is a relatively easy cycle to Liverpool St station, just the first mile or so uphill with a lot of traffic.
Once at Liverpool St its back on the train to Harwich and the overnight ferry to Esbjerg (note - there is no longer a ferry service to Denmark!) 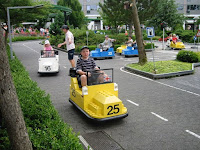 Once we arrived in Esbjerg we had planned a route cycling across Denmark to Vejle where we would catch another train north to Frederikshaven to catch another ferry to Gothenberg.
Each day was planned to ride between 30 and 40 miles with most overnight stops at Danish Youth Hostels but a two night stop at Legoland.
Riding across Denmark's undulating country on quiet roads and the occasional bike path was relaxing and easy. 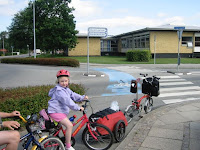 Each morning started with the usual continental breakfast at the youth hostel. Repack the bikes and then set off. Lunch was usually a stop during the morning to buy bread and cheese which we eat at a suitable stopover.
We towed a Radical Cyclone trailer with our luggage because we didn't want to overload the children's bikes.
A couple of small solar chargers on the trailer tried to keep phones and iPods going but didn't charge enough so we had to resort to 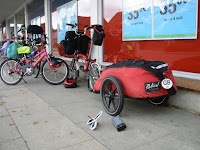 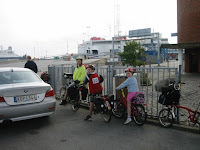 Until Vejle the country had been relatively flat apart from the odd hill. One of which had a memorial to the crew of a Lancaster bomber that had crashed during WW2.
Vejle is a lovely old town and after enjoying coffee & cake we set off to find the youth hostel which was at the top of what must be the biggest hill in Denmark!

The next morning we rolled down the hill to the railway station to catch the train to Frederikshaven. The train was 30 minutes late and from the moment of getting on there was clearly something wrong.
Amazingly the train manager came to our reserved seats and explained the train was going to terminate early and we would have to change trains. Not easy with very low platforms! The next train was massively overcrowded with lots of bikes but the crowd was cleared to allow us on first! After another stay in a youth hostel we caught the ferry to Gothenburg. 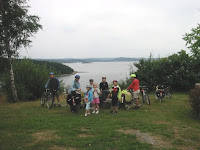 Once in Sweden we went north from Gothenburg to Stenungsund where friends met us and we cycled across the island of Tjorn to stay in a rented house near Skarhamn.
We stayed there for a week bathing in rocky bays and eating seafood.  Also involved a 20 mile round trip to buy alcohol from the state run off licences! Local supermarkets only sell low alcohol beer!
The island has lots of rocky inlets with bathing platforms and the occasional sandy beach. Just offshore there are other uninhabited 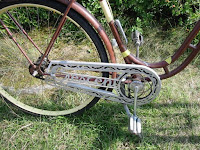 islands which are easy to get to with a rented boat.
Lots of visitors and local visit the bays on their bikes and there are usually a collection of unlocked bikes alongside the path to the bays.

After a lovely week we set off back to Stenungsund in pouring rain and caught a train back to Gothenburg where we stayed the night in an old sailing ship moored in the harbour. A trio of British Morgan 3 wheelers also staying there. 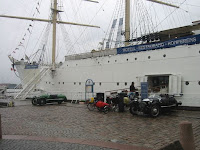 The next morning we crossed the tall harbour bridge to the ferry terminal and caught the ferry back to Newcastle. After leaving in the morning the ferry stopped at Kristiansand in Norway in the evening and then arrived in Newcastle the next morning. (note - this ferry no longer runs either!)

After a 6 mile cycle from the ferry port to Newcastle railway station we caught the train home! 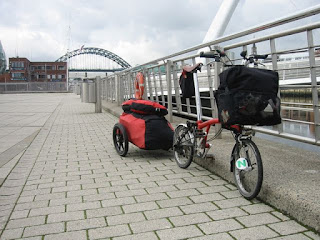